To link modifiers to items we first need to create the modifiers and mod groups. To do this, press Admin at the bottom of the screen and Items on the right. 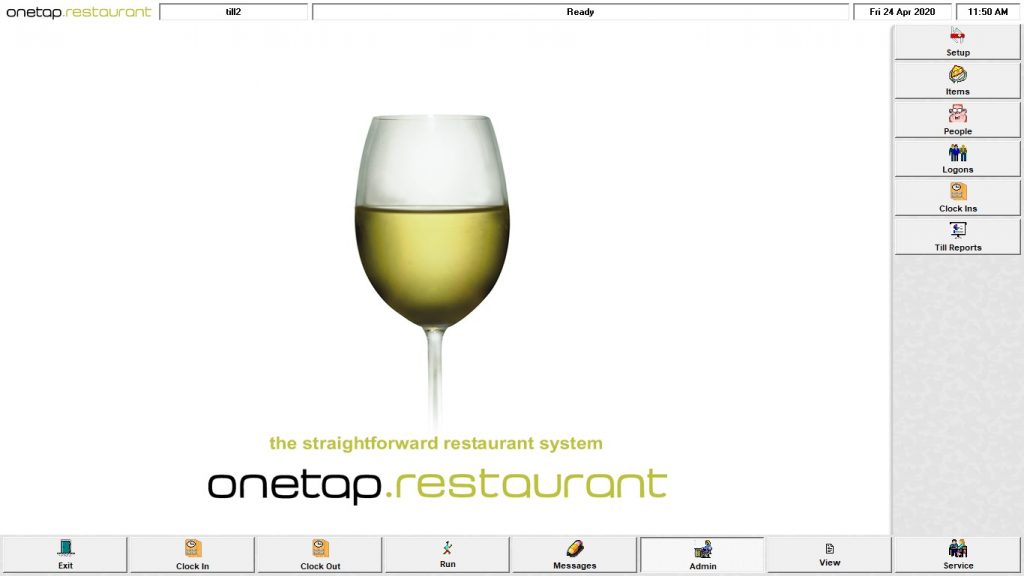 After entering your login details, press Modifiers on the right then New at the bottom of the screen. 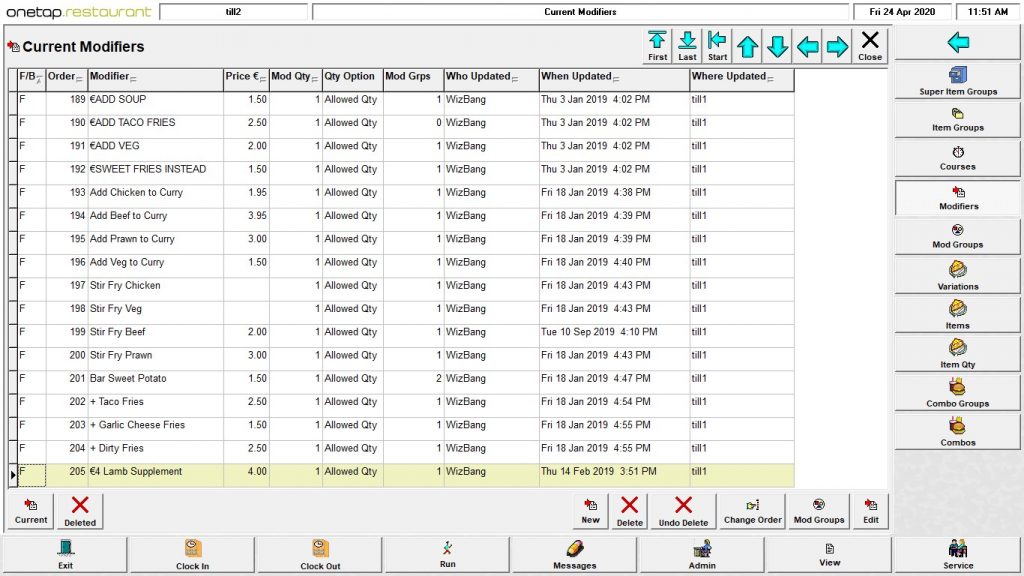 For this example we’ll set up temperature options for steak. The name of the modifier is all that needs to be entered.

Food is selected by default but for drink modifiers, beverage needs to be selected and if needed, a price can be applied or the modifier can be set to print to a printer other than the item’s printer. 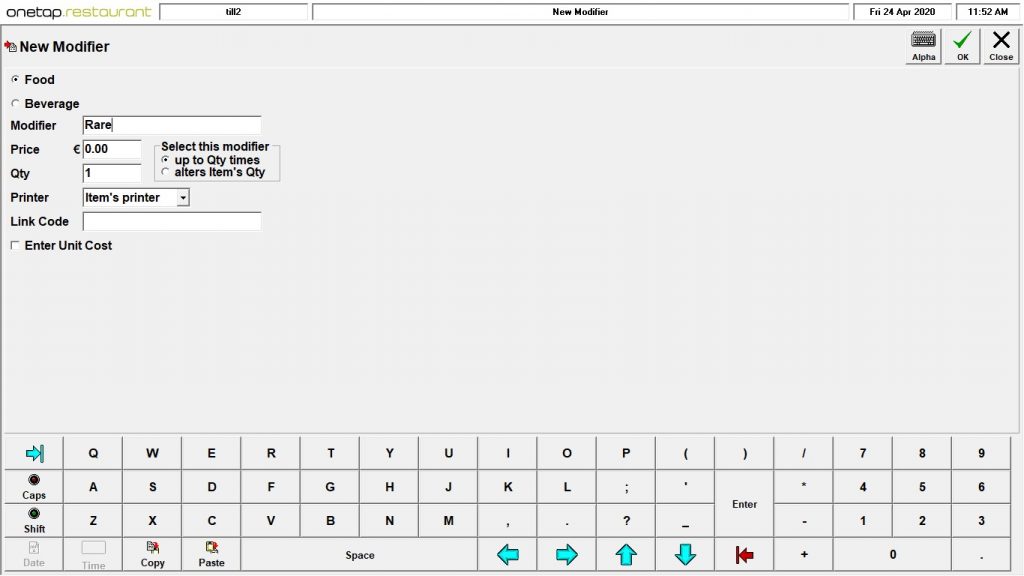 The modifier can be saved by pressing the green tick at the top right and more modifiers can then be created – Medium Rare, Medium, Medium Well Done and Well Done.

Once the modifiers have been created we need to put them into a mod group. To do this we select Mod Groups on the right hand side then press New at the bottom. 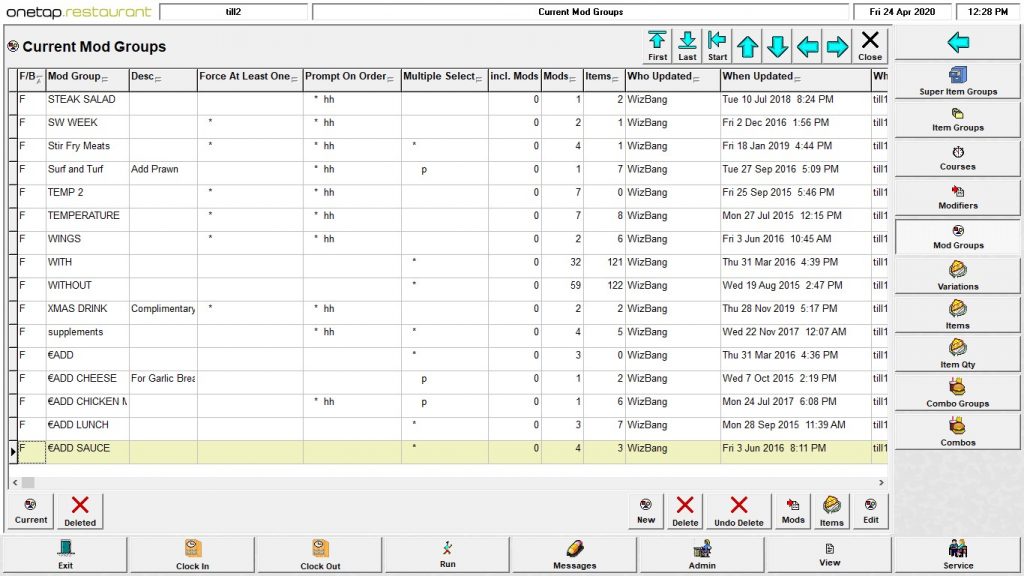 Just like with modifiers, food or beverage needs to be selected. The mod group name needs to be entered though the description is optional.

There are a few tick box options.

Force at least one modifier: This can be selected to make sure that a modifier is selected. It makes sense to tick this box for steak temperature as the chef will need to know what way to cook it.

Prompt when ordering: This makes the list of modifier options pop up when the item button is pressed. This option is selected automatically when “Force at least one modifier” is selected.

Prompt when ordering on Handheld: Select whether the options should pop up on a handheld.

Allow more than one modifier: Tick this box to allow multiple modifiers to be selected from the same mod group. It makes sense to leave this unticked for steak temperature.

Proceed: If this box is ticked, the modifier window will close when a modifier is selected unless there is another mod group linked to the item that has been set to prompt in which case the next list of modifiers will open. If the box is not ticked, the modifier window will stay open until the tick at the bottom right is pressed. This makes sense if multiple modifiers are likely to be selected.

No. Included Priced Modifiers: This allows a certain number of priced modifiers to be included for free. 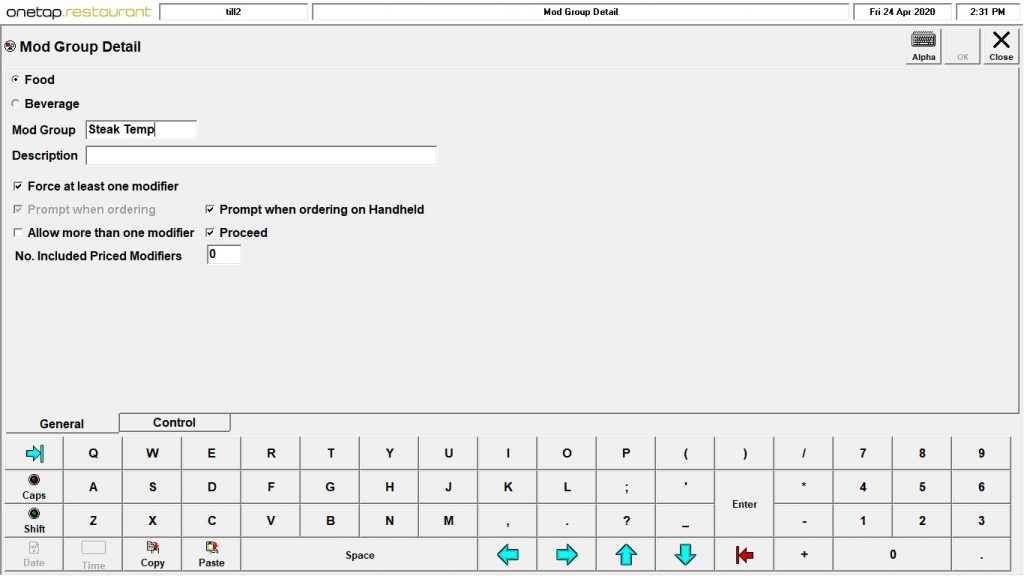 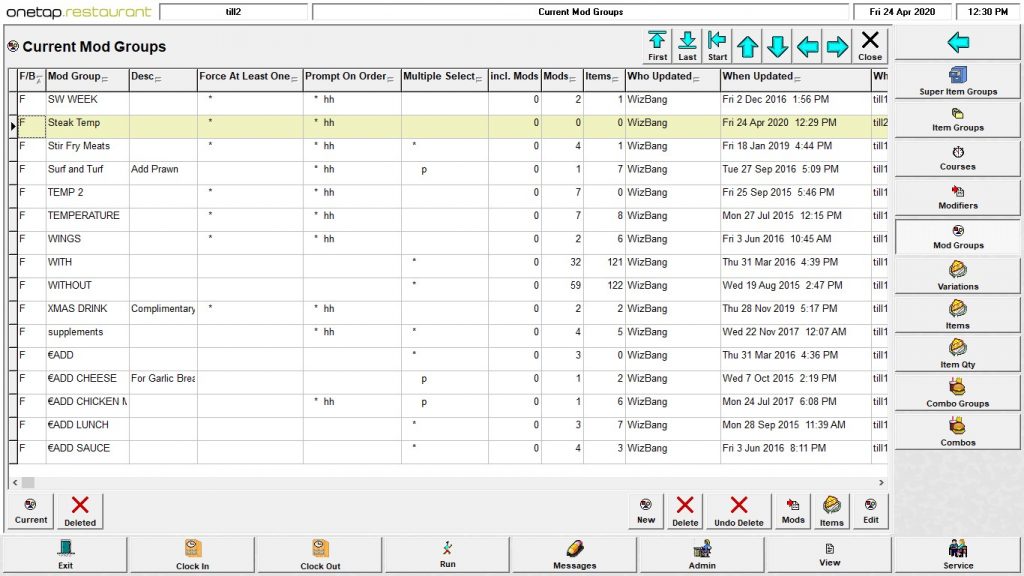 To select the modifiers, scroll down the list on the left. The newest modifiers are usually at the bottom of the list. Tapping on the modifiers moves them into the mod group. To remove a modifier, select it and press the left arrow. Pressing the left arrow with the line removes all of the mods from the group. Once the mods are selected, press OK at the bottom right of the screen. 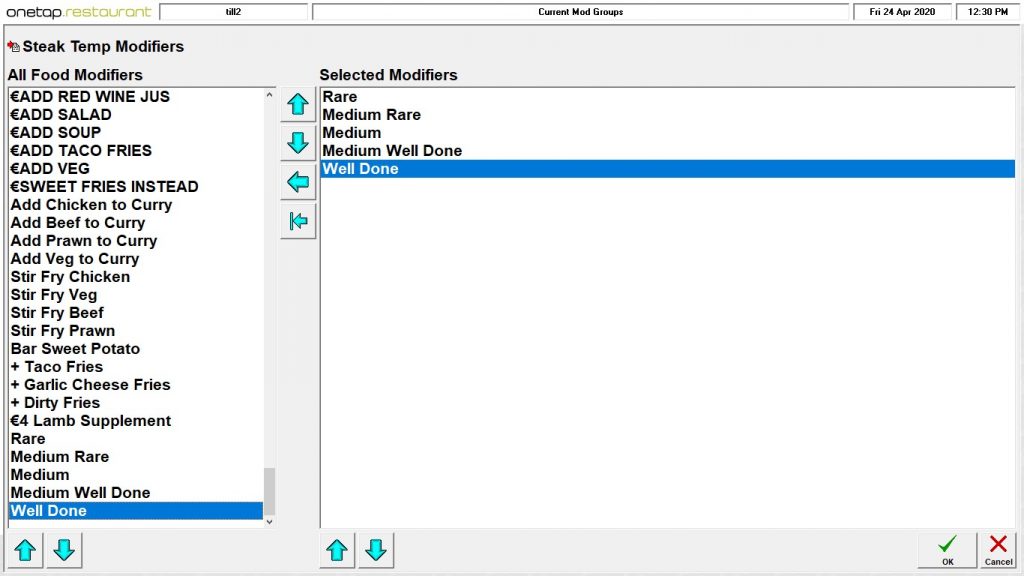 The mod group will need to be linked to the item. This is process is the same as linking modifiers to mod groups. By selecting Items at the bottom of the mod groups screen, you can scroll down and select the item from the list on the left and then press OK to save. 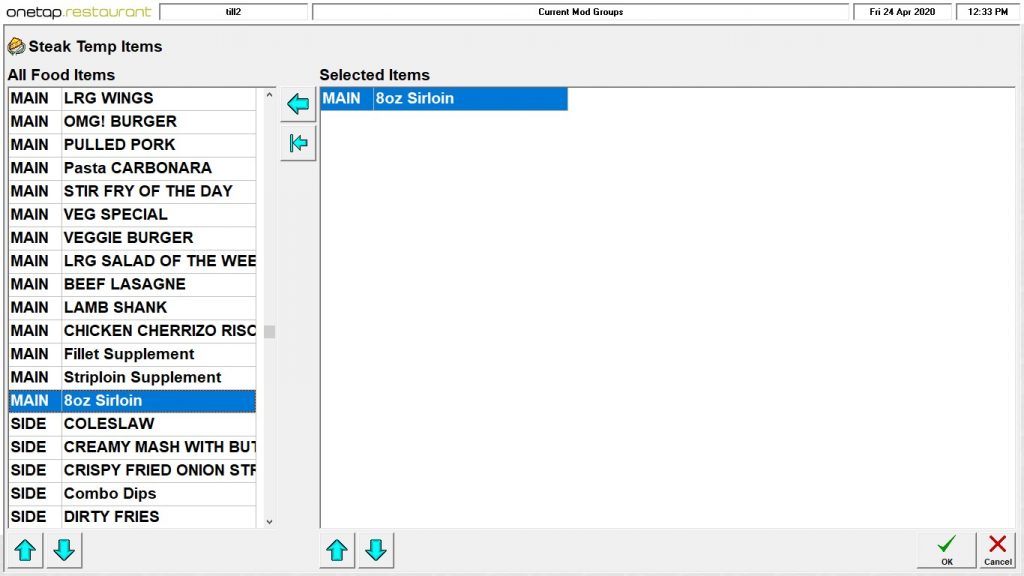 You could also go to the item screen and with the item highlighted press Mod Groups at the bottom of the screen and select from the list of mod groups. 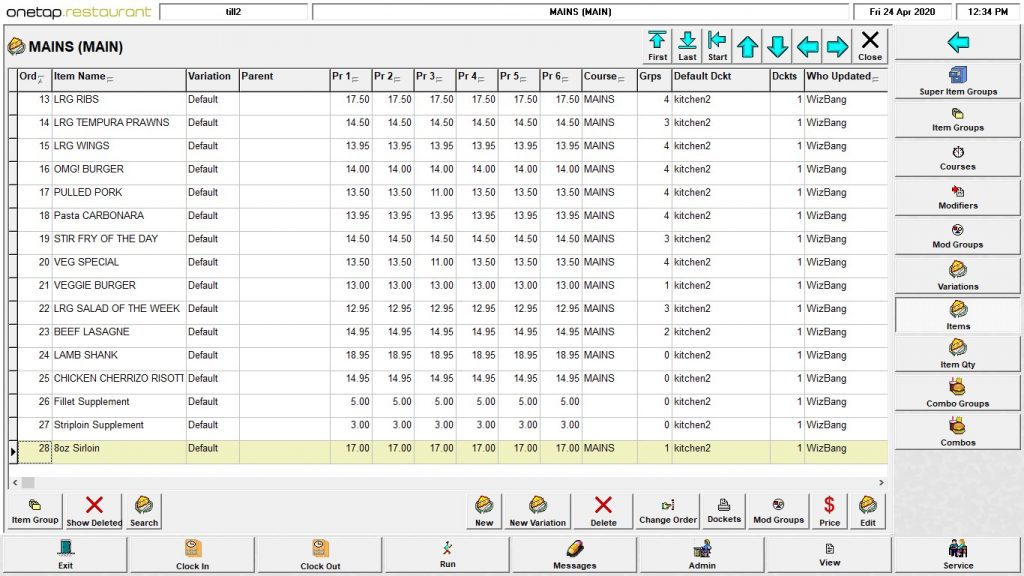 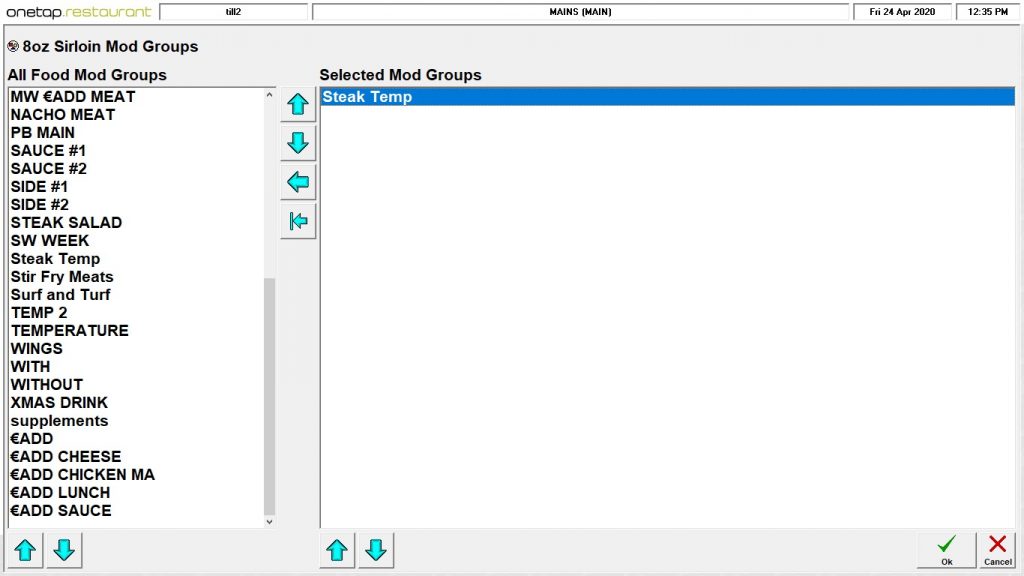 You can link as many mod groups as you need for the item. For this example, I also created a sides mod group with the same mod group rules as the Steak Temp mod group.

Once all items, modifiers and mod groups have been created and linked, the software will need to be restarted by pressing Exit at the bottom left of the home screen to close the software and then double tapping on the Onetap Waiter icon to start it up again.

When 8oz Sirloin is selected, the temperature options pop up. 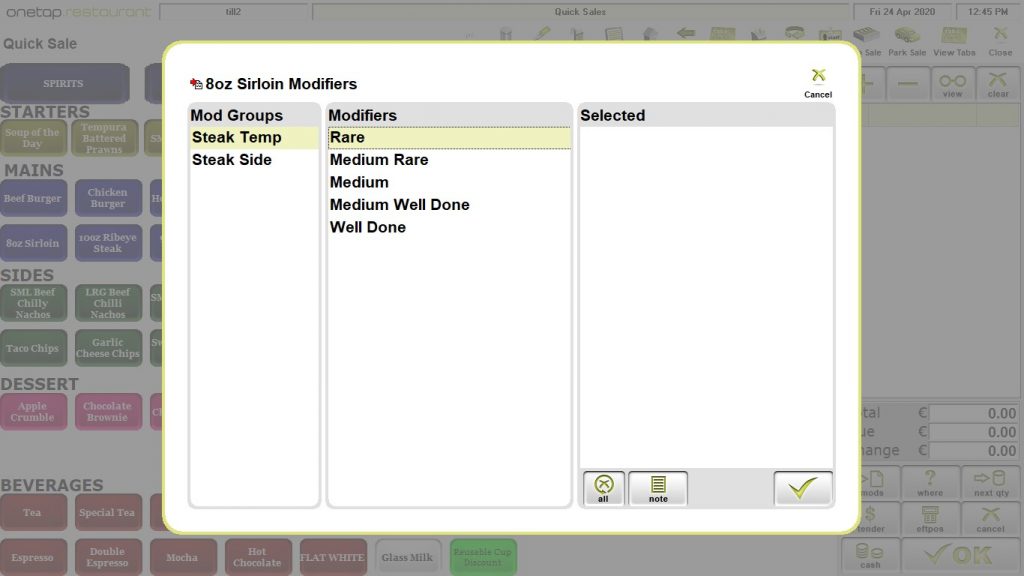 As soon as a temperature is selected, a second list pops up for sides. 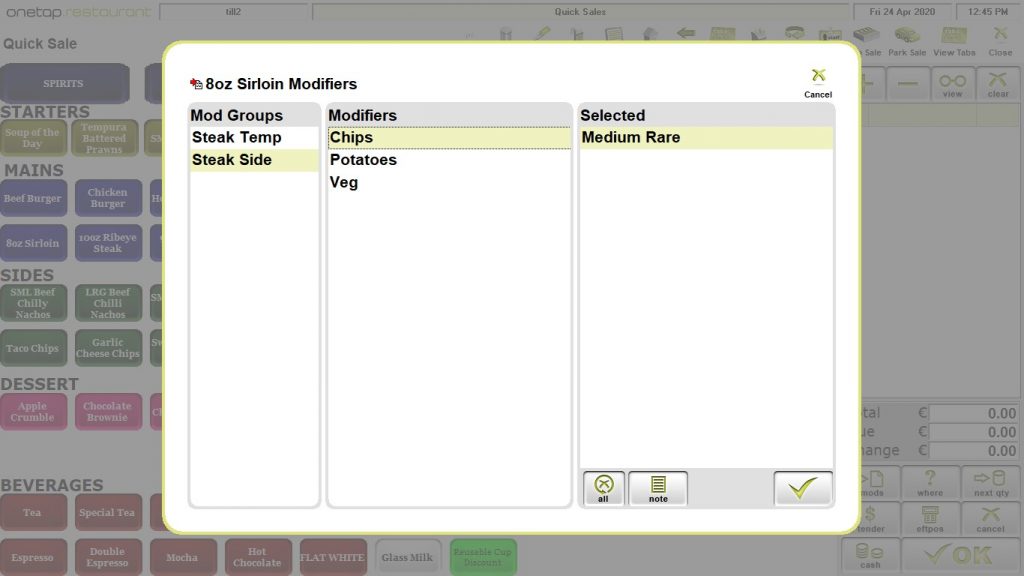 Once a side is selected, the window closes and the next item can be selected or the order can be sent. 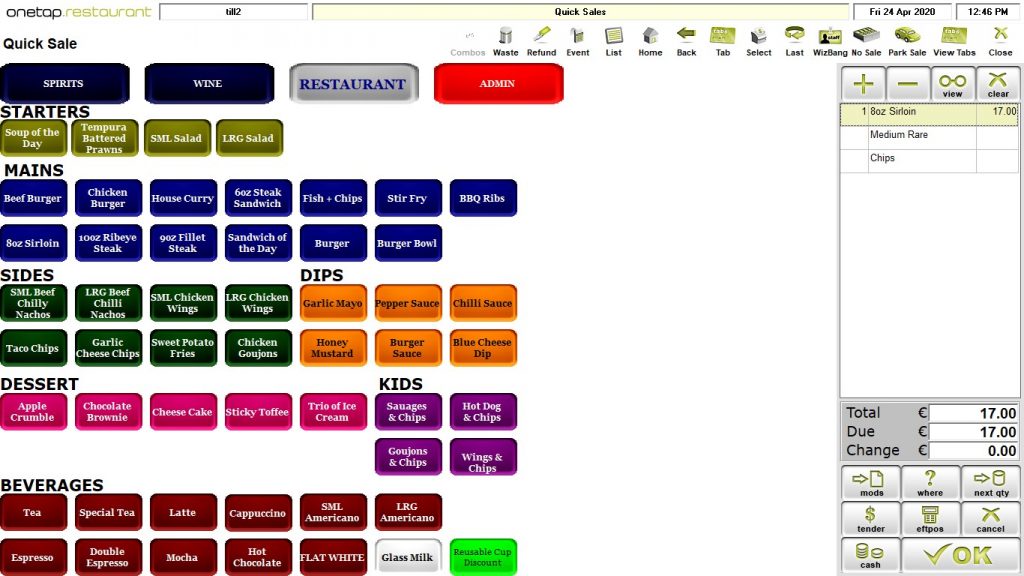 Adding a priced modifier is done in the same way with an amount entered into the Price field. 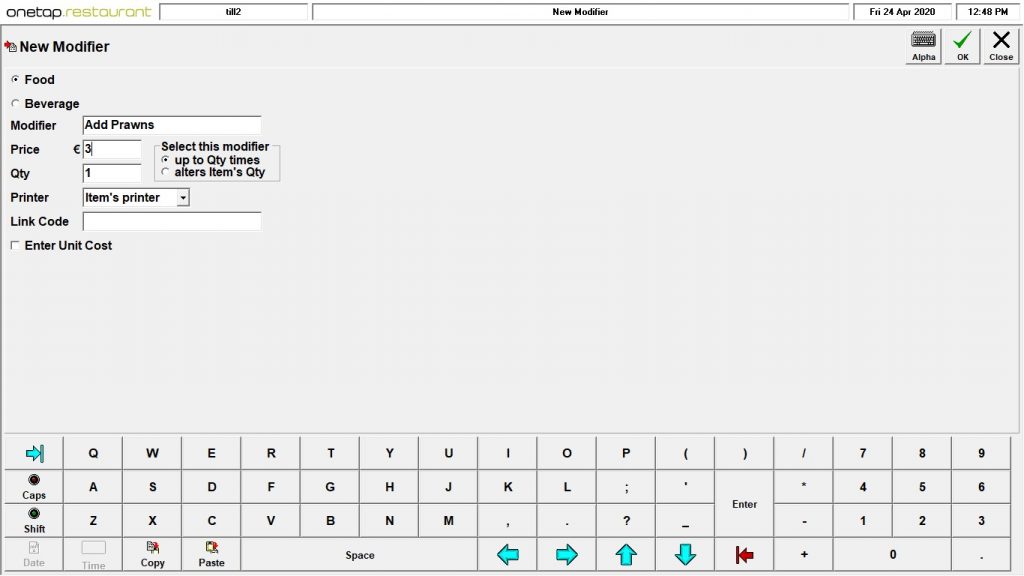 The Steak Extras mod group can be set to prompt which would make it pop up after the side is selected. If it was set to pop up and the customer didn’t want prawns, you just need to press the tick button to continue. 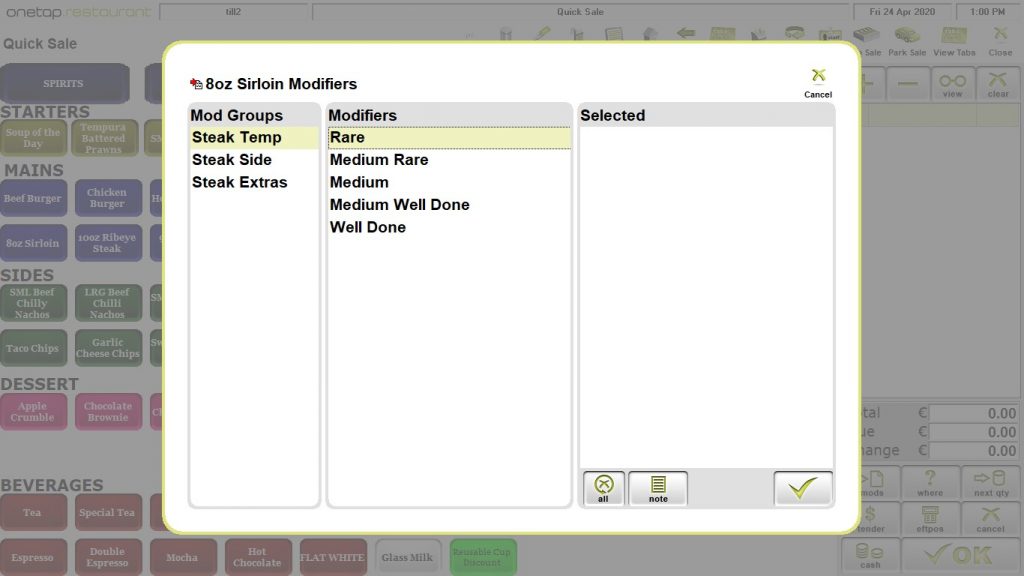 With Steak Extras not set to prompt, you can open the modifiers window by pressing the Mods button near the bottom right of the screen. 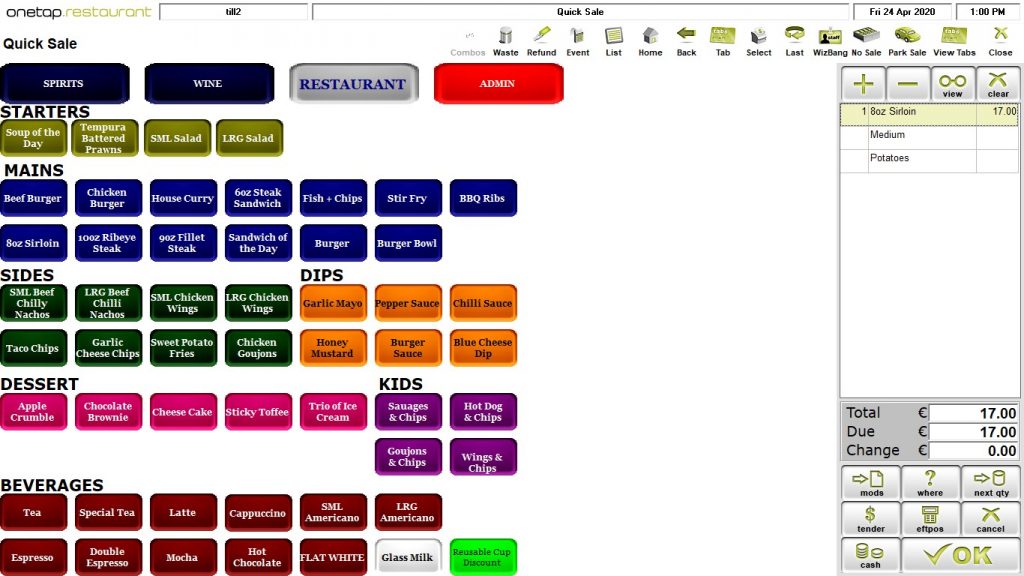 The mod group can then be selected from the list of mod groups on the left. There is also the option to select food modifiers that are not linked to the item by pressing All Food Mods. 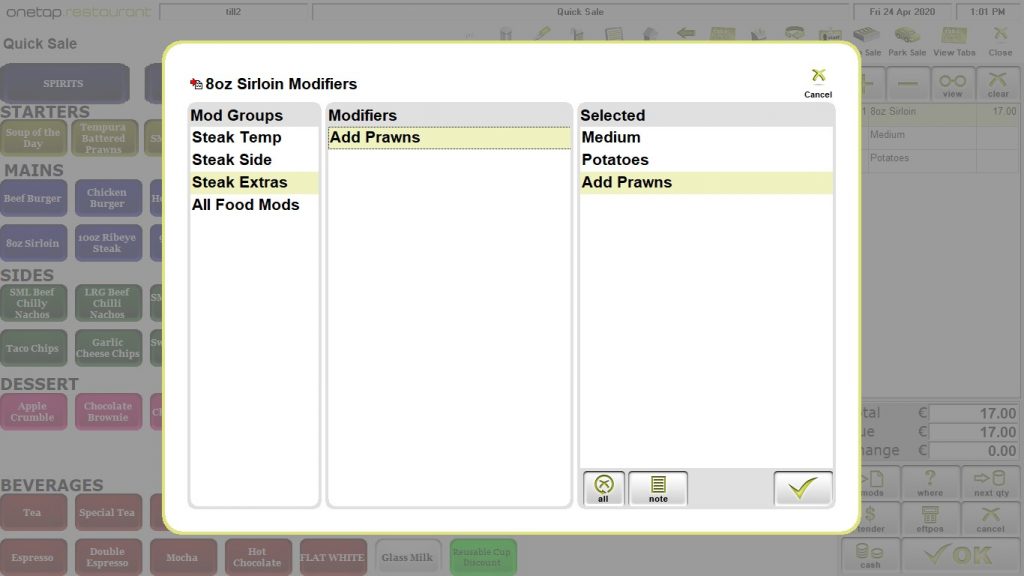 When the modifier is selected, press the tick to continue. The price of the modifier has now been added to the total price for the item. 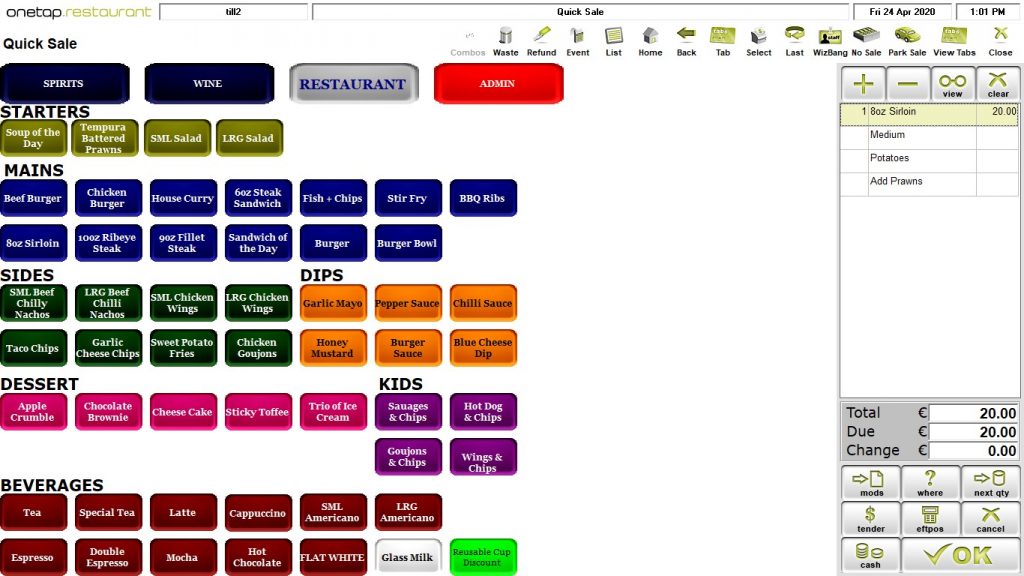